On April 11th, 2010, I organized (w/ Nira Paliwoda and Sam Teichman) a group of performers and volunteers to come together to put on a benefit concert at Brooklyn Bowl in New York City, to help raise money for the victims of the February 27th earthquake and subsequent tsunami in Chile.
Chris Barron, from the Spin Doctors, headlined, and we raised several thousand dollars, and had more than 1800 viewers tune in worldwide to watch the webcast! 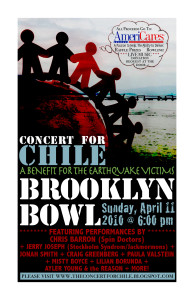